With a history of educating students for the last 55 years, Sacred Heart University (SHU) in Connecticut is a Catholic, privately-owned institution that has a focus on degrees in the liberal arts, business, healthcare, education, communication, computer science, and engineering.

The University is constantly expanding, introducing 8 new buildings in the last 4 years. In fact, the campus recently doubled in size after acquiring the former world headquarters of nearby company, General Electric. This additional campus houses the academic programmes for business, education, and computer science (computer engineering, computer gaming and cybersecurity). The campus even has its very own hotel, supplying internships for students studying a Bachelor in Hospitality, Resort and Tourism Management.

With a 15:1 student to faculty ratio, students can expect lots of one-to-one attention from their professors, who are often leaders in their field. Teaching quality at SHU is of a high level, evidenced by the institutions ranking in Princeton Review’s ‘Best 382 Colleges: 2018’.

SHU’s sports teams play at the highest level of college sport – NCAA Division 1. This gives new students the chance to get involved in American school spirit by cheering on their classmates in the stadium or by joining one of the teams themselves. They can also get involved in a variety of other ways, such as the marching band or theatre.

SHU has a strong track record of helping students into their future career too, with 95% of graduates in employment or further study just one year after the completion of their degree. A selection of scholarships, up to USD 17,500, are available for undergraduate students.

Study options at Sacred Heart are offered across…

College of Arts and Sciences

The school provides students with a hands-on approach to learning, small classrooms, and individual attention. Its accomplished faculty are renowned for research in computer ethics, algorithms and gaming design.

The college is AACSB-accredited and is recognised by Bloomberg Business Review as one of the Top 100 bachelor programmes in the USA. Students are taught by professors who stress hands on learning, understanding of the global marketplace, while using state-of-the-art technology.

The college offers programmes in teacher preparation, literacy, school and district leadership. Professional educators from its partner schools and districts will provide students with real world opportunities to grow, via strong mentoring and rewarding clinical experiences.

All SHU, nursing programmes are accredited by the Commission on Collegiate Nursing Education. Students will benefit from hands-on clinical practice at many area hospitals, as well as simulated learning in the college’s state-of-the-art lab rooms.

To apply to Sacred Heart University, students must…

Sacred Heart University comprises more than 300 acres of land, including an 18-hole golf course and the former global headquarters of General Electric, now named West Campus. The main campus of the University sits on more than 100 acres in Fairfield, Connecticut - located less than 60 miles from Manhattan and approximately 150 miles from Boston.

The University-owned golf course is located in Milford, Connecticut. It is a signature Tommy Fazio-designed facility that has been ranked fourth-best in Connecticut by Golf.com.

The Centre for Healthcare Education building opened for the fall 2017 school year, housing the College of Health Professions and College of Nursing. The Centre is designed to offer students with aspirations in any health-care profession the best possible learning environment to ensure that they are prepared to succeed in the booming health-care industry.

The University’s newest dining hall, JP's Diner, is a 1950s-style diner and the first on-campus diner in all of New England.

Some of the University’s support services include…

Licensed, professional counsellors provide counselling and support to students having difficulty dealing with a variety of issues, including anxiety and homesickness.

The Student Health Center, located in The Wellness Center, provides accessible and comprehensive on-campus health care for students. Services include evaluation and treatment of acute illnesses and injuries, immunizations and more.

The Student Wellness Education and Empowerment Team (s.w.e.e.t.) is a fun and positive student-led group that promotes wellness on campus. It is a team of students helping other students by providing information on important issues college students care about (mental health, stress management, bystander intervention, and more) and connect students with helpful resources.

Sacred Heart University has a new phone application -SHU Safe- that enhances the security of its community members both on and off campus. This application offers quick access to emergency services as well as other safety features.

The primary function of SHU safe is to serve as an emergency communication tool between the University community and campus security. SHU Safe offers three major features: Emergency calls, iReports and Safety check.

“Sacred Heart University is a school with extremely comforting student services, from admissions to the professors. Everyone is extremely friendly and knows you by name, which makes you feel welcomed. Public Safety does a great job securing SHU’s students.” - Lea, Germany, Class of 2017

The Office of Career Development and Placement assists students with all aspects of career planning and job searching. Students are encouraged to take advantage of these services to increase their competitiveness in the marketplace.

Students have the opportunity to meet with staff members from the Career Office to discuss major selection, career goals, transitions and job search strategies.

The faculty encourages students to broaden their horizons through an internship in their area of interest. The Career Center provides information on internship opportunities through the PioneerNetwork Job Board and other resources.

Job fairs, special speakers, on-campus interviewing opportunities, and much more are offered throughout the year for students.

“Career Development played a significant part of my freshman year! I worked with a Career Specialist to create a resume as well as confirm that Sociology was the major for me. I felt more confident having this resource on campus.” – Michelle, Class of 2017

Interested in
Sacred Heart University ?
Visit website
- -
Sacred Heart University was founded in 1963 by the Most Reverend Walter W. Curtis, second bishop of the Diocese of Bridgeport, to provide an institution of higher education that would serve the people of the diocese and region, regardless of sex, race, creed or religion. It is the first Catholic University in America to be led and staffed by lay people. Signs of the University’s growth and vibrancy are evident. Enrolment has risen from the original class of fewer than 200 undergraduate students to approximately 8,950 full-time and part-time undergraduate and graduate students.

New degree programs and majors in relevant disciplines are regularly added to the curriculum, and the University now offers more than 80 undergraduate, graduate, doctoral and certificate programs on its main campus in Fairfield and satellites in Stamford, Luxembourg and Ireland.

SHU have over 100 of social, academic, leadership, service, media, multicultural and performing arts clubs and organizations. An ever-widening outreach to the community balances the University’s commitment to academic excellence. Last year 2,500 students, faculty and staff volunteered more than 50,000 hours of service in the community through opportunities such as academic mentoring and tutoring in the Bridgeport Public Schools, programs such as CURTIS Week, Community Connections and Habitat for Humanity.

University is rooted in the Catholic intellectual tradition and the liberal arts, embraces a vision for social justice and educates students in mind, body and spirit to prepare them personally and professionally to make a difference in the global community. Additionally, Sacred Heart University aspires to achieve prominence through innovative teaching and learning while cultivating a campus community that is recognized as caring and creative.

The main campus of the university is located in Fairfield, Connecticut which is less than 60 miles from Manhattan and approximately 150 miles from Boston that is spread across more than 100 acres, with an additional 200 nearby acres including a University-owned golf course, and West Campus. https://images1.content-gbl.com/commimg/myhotcourses/institution/profile/myhc_243280_320px.jpg Sacred Heart University https://www.idp.com/nepal/universities/sacred-heart-university/iid-us-00055/
Sacred Heart University 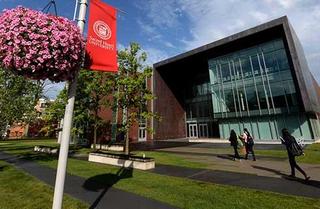